It’s rhubarb season !!! Wooohooo! To celebrate, I wanted to make an easy, multifunctional recipe by marrying  homemade rhubarb compote with a buttery, light and delicate Dutch pancake. You can have this for dessert, breakfast, brunch in a group or…my favorite… alone. 🙂 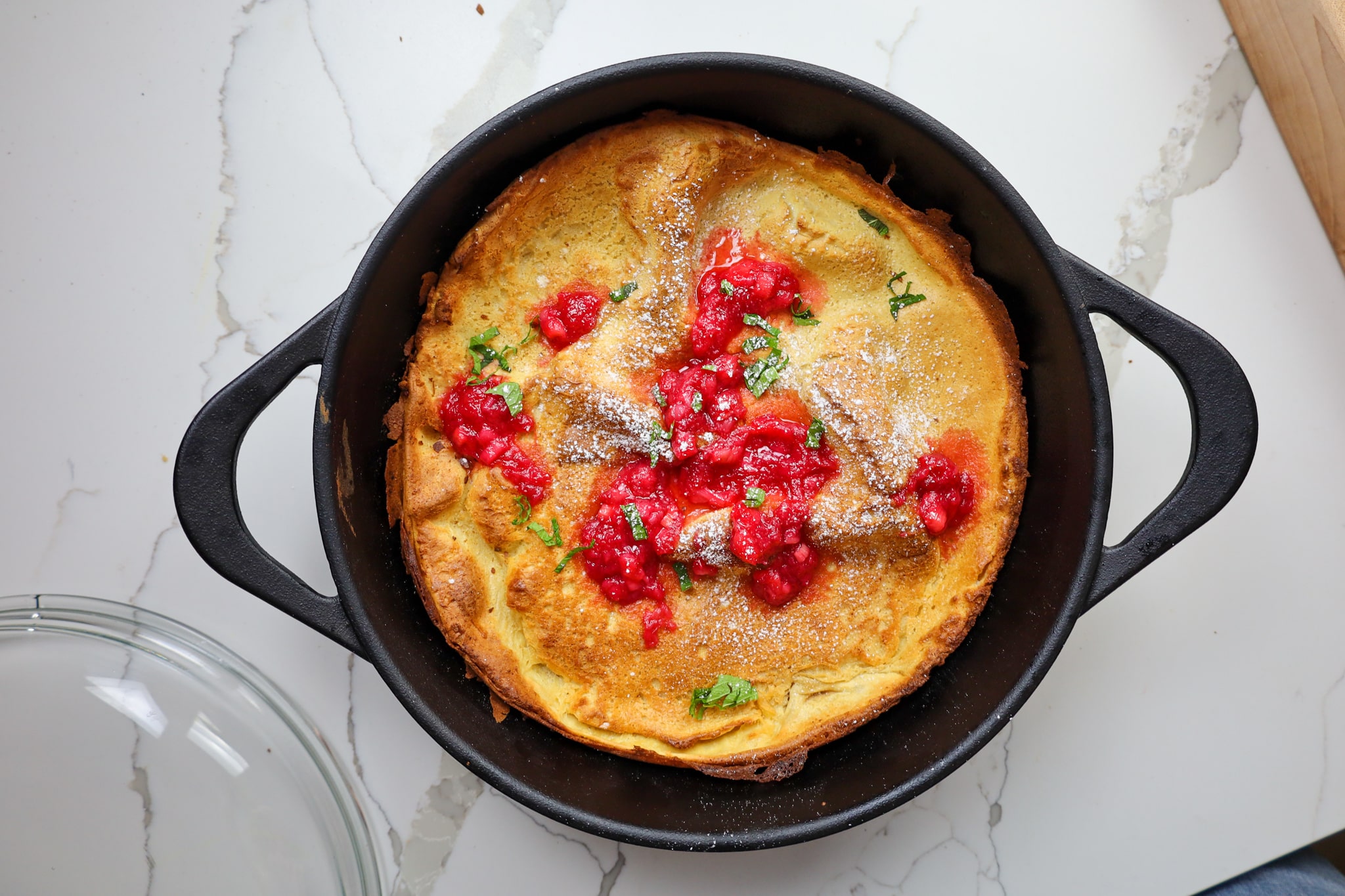 If you’ve ever had a bad experience with rhubarb—like discovering the brutally tart flavor of a raw rhubarb out of season—you can rest assured that this recipe will change your opinion of this “fruit.” Yes, it’s a fruit! Well, legally at least, even though it’s technically a vegetable. Rhubarb is confusing and moody. She changes with the seasons and has more than one identity, kind of like me, to be honest. After being categorized as a veg for her whole life, Rhubarb was officially declared a fruit in 1947 by a New York court since it is most often cooked as a fruit in the United States. This may have served to lower the taxes for businesses importing rhubarb as well. Regardless, I am happy that rhubarb has ended up where she’s ended up. On my pancake.

Speaking of rhubarb on my pancakes… rhubarb goes into a *magical* transformation this time of year. The official rhubarb season (for field-grown rhubarb) is from April-May until the end of summer. It develops a rich, sweet flavor that’s perfect for desserts. Little rhubarb consumption tip: make sure that you only eat the stems and not the leaves as they contain oxalic acid which is poisonous. I also recommend stocking up on rhubarb and freezing them wrapped in tin foil in plastic bags for delicious Christmas desserts.

So that’s the scoop on rhubarb.  Now let’s talk about the Dutch baby!!! No, not like a human Dutch baby. Dutch baby is a term for a large baked Dutch pancake. In terms of flavor and texture, Dutch pancakes are big, puffy, crepe like in the middle, sweet, and buttery. But why are the called Dutch pancakes? The pancakes derived from the original German pancakes and were served in Manca’s Cafe in Seattle Washington during the first half of the 1900s. It is said that one of the daughters of the owner of the café coined the name Dutch Baby. We don’t know how, but somewhere along the way, it turned into a giant, inflated version of the original. 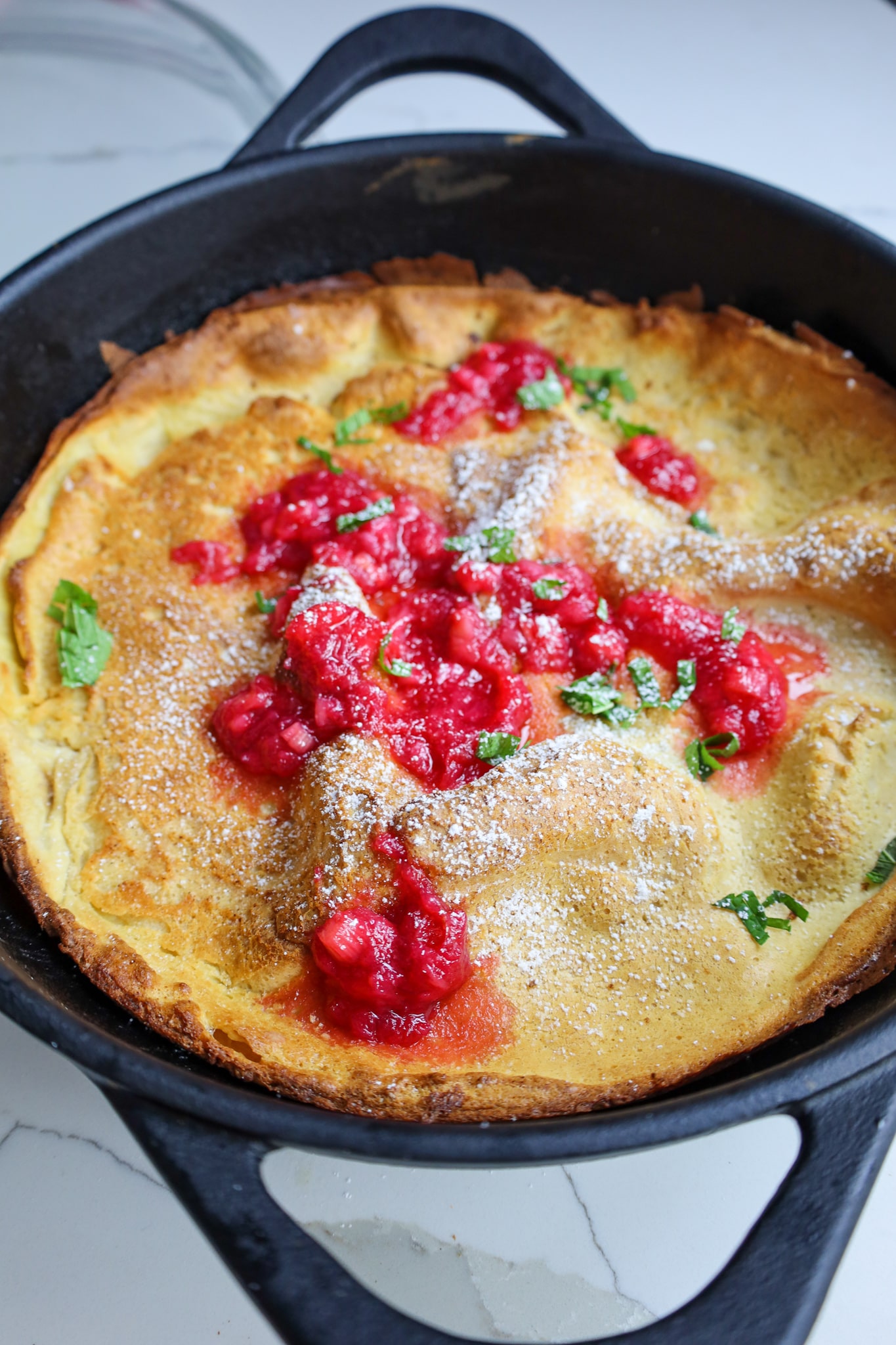 What should I do if I don’t have a blender for the batter?

Making this poofy masterpiece is pretty simple. You blend the batter until it’s smooth, making sure that all the ingredients are fully combined. I recommend a blender for this, but if you don’t have one you can make it happen with a whisk and some muscle. You can start by whisking the eggs for around 2 minutes until they are foamy and less yellow. Then whisk like a champion until you have mixed the rest of the ingredients.

Do I have to use a cast iron?

I do recommend using a cast iron for this because they are oven and stove top safe and they retain heat EXTREMELY well. Make sure you heat the iron cast skillet in the oven for 10-15 minutes before putting it on the stove, just to make it nice and hot for the cooking process to start. I was gifted mine from Cravings by Chrissy Teigen and I love it! You can use my code : SKYLER10 to get a lil discount. Honestly, nothing beats a good, solid cast iron skillet (except if you’re cooking with lemon, wine or tomatoes) and Chrissy Teigen’s pan is SUCH a good price.

Rhubarb is very tart and not everyone likes it. No problem! If you are making this outside of rhubarb season, or if you’re not a rhubarb fan, I recommend strawberry or raspberry compote instead. The beauty of this recipe is that you can go with any fruit on top like bananas, blueberries, or anything you want. You can have a lot of fun with it! I used rhubarb because it is in season and I love the tartness with the sweet pancake.

Can I just use store bought jam or compote instead?

ABSOLUTELY. You can always take short cuts. I will never judge you!!!

What if I can’t find mint?

Mint is optional. I used it because I had it at home and I like the way it adds another flavor to the dish.  I’m a sucker for a pop of color and herby influence. 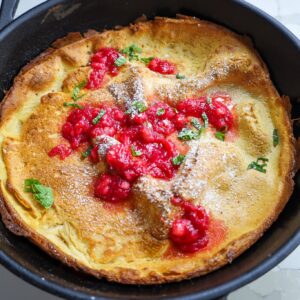 This baked pancake is a simple, delectable dish that can be served as a dessert, breakfast, or brunch. The pancake is sweet, buttery and poofy and topped with a tart rhubarb compote and fresh mint. You can share it with your guests or enjoy it alone. It's a guaranteed hit either way!
Print Recipe Pin Recipe
Total Time 40 mins
Course Breakfast, Brunch, Dessert
Cuisine American
Servings 1 large pancake ( feeds 4)

For one large Dutch pancake:

For the rhubarb compote:

If you don't have a blender you can use a whisk. Start by whisking the eggs for around 2 minutes until they are frothy and less yellow. Then whisk each ingredient in until the batter is smooth and the ingredients are fully mixed.
Keyword all purpose flour, butter, eggs, granulated white sugar, mint, powdered sugar, rhubarb, salt, sugar, vanilla extract, whole milk