The sun comes out for one second and here I am making a bright, light, Latin American / Caribbean influenced dinner. Can you blame me?!? 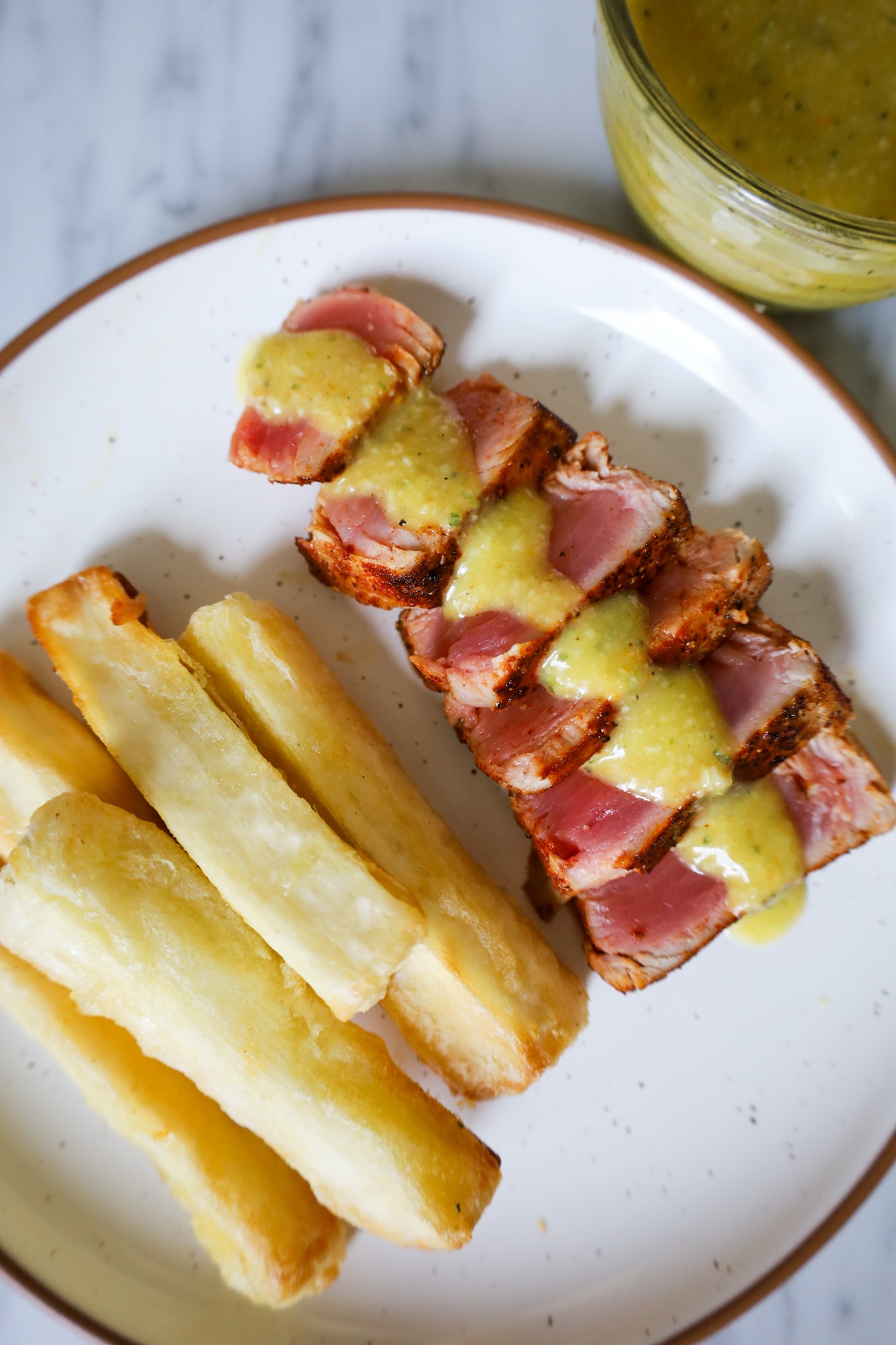 If you’ve never tried yuca before, let this be the sign from the universe that you need to try it now!!! Yuca (also known as cassava) is the root of the cassava plant. It’s not edible raw (it’s actually poisonous when it’s raw, so don’t play around with raw yuca lol,) but it is edible when peeled and cooked. It has a starchy consistency and a sweeter, nuttier essence than the potato. It tastes *amazing* boiled, mashed or fried. I’ve eaten every preparation during my little yuca experimentation spree, and wow, honestly…. you should not sleep on boiled yuca. You shouldn’t sleep on these air fries, of course, but like…boiled yuca sounds like it would be boring. News flash: IT’S NOT. Stay tuned for more recipes using boiled yuca.

If you’re wondering why you maybe haven’t heard of or used yuca before, it’s because yuca is common in Latin American countries and not really common here in the USA. It’s used almost as often as the potato in certain areas of Central and South America — I’ve gotten messages from followers from all over the place (Brazil, Colombia, Venezeula, Guatemala, Cuba, Argentina, Costa Rica, Peru and more) sharing different ways their families or local restaurants prepare and serve yuca. It’s no secret that we can’t travel right now, so the only way I’m scratching my travel itch is to cook dishes from different cultures while at home. So, to the Latin American community on my page: when I say your messages, stories and tips make my world, I mean that. It means SO much to me to that you are taking the time to share your stories and encourage me to play with ingredients from Latin American countries. Thank you so so so much to you for teaching me and encouraging me!

Where can I find yuca?

I found my yuca at Whole Foods!! If you have a Whole Foods nearby, check the produce section there. Other stores may have it as well, but if you can’t find it, look up hispanic grocery stores in your area– they may have fresh or frozen yuca there.

What is Cuban mojo?

Mojo is a traditional Cuban sauce or marinade (it can be one, the other or both!) that usually has a base of garlic and citrus.

I can’t have garlic or I just don’t like it…any other sauce suggestions?

No problem at all – there are SO many sauces you can serve with yucca fries. You can go with mayochup (mayo + ketchup mixed together) which is also known as salsa rosada. You could also go with a regular ketchup! I also think salsa verde (sans onion and garlic,) regular tomato based salsa, chimichurri (sans onion and garlic), or avocado puree with lime would work.

Not into tuna, what other options would go with yuca fries as a side?

Glad you asked!! Any grilled fish (I personally love salmon or swordfish) will go beautifully here. You could also hop on the meat bandwagon with juicy, spicy chicken breast, pork loin or a sexy steak.

Where did you get your tuna?

Believe it or not, I got these yellowfin tuna steaks from Aldi. They were previously frozen, but when thawed properly in the fridge overnight, previously frozen fish can deliver the same results. Some people think that frozen fish = not fresh and that’s not true. The frozen fish you buy at the store is typically frozen when it’s at its peak freshness, so don’t let the temperature fool you. Some frozen fish or seafood is even better quality than the fresh ones. I would go for any yellowfin tuna steaks that say “sushi grade” on the bag. Thaw in the fridge overnight. Whole Foods also has a great fish selection, so you could get the tuna fresh from there or your local seafood market!

I’ve never chopped yuca.. how do I break it down?

It’s your lucky day because I have a tutorial on how to cut up the yuca fries and prepare them on Instagram!!! You can get that below! 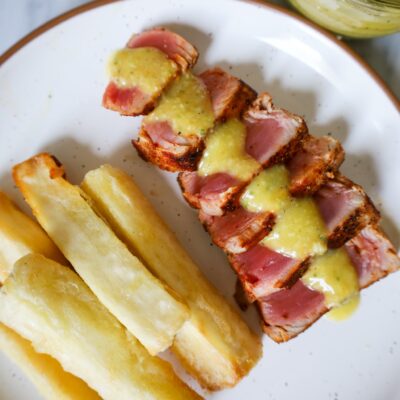 For the yuca fries:

For the tuna steaks: