You know what’s low key really annoying? The fact that potatoes are bad for you. Like excuse me, I’m going out of my way to eat a natural substance from the earth (that isn’t sugar but might as well be), and you’re telling me they’re bad for me??! Ugh. Don’t get me wrong: I love a mashed potato moment. When I go to a steakhouse, I always order filet mignon with mashed potatoes. In fact, mashed potatoes are my favorite kind of potato. Yes, I prefer the fluffy, silky mash over French fries, roasted potatoes, loaded baked potatoes, potato skins, and potato chips. BUT, mashed potatoes aren’t really an everyday kind of food — especially the way I like to eat them — fluffed up with butter, salt and sour cream. That’s where these mashed red lentils come in!

This red lentil mash is one of my favorite comforting, hearty, mashed potato-esque sides to enjoy. Before I get into the recipe, I want to link some *info* on lentils and why they are a nutritious option. In a nutshell, I choose red lentils for this recipe because they have a similar comforting flavor to potatoes (with a little more earthiness) and they easily mash when cooked with a little extra liquid. Nutritionally, potatoes have a very high glycemic index, which isn’t a good option for anyone with diabetes or blood sugar issues. On the other end of things, red lentils have a low glycemic index and other nutritional benefits.

While all lentils are good for you, you can only make this recipe with red lentils due to their texture. Other types of lentils don’t provide the same *~mash~* quality. So what did I do with this recipe to make the mash sooooo delicious and fabulous!?!? First, I boiled the lentils in a vegetable stock, with smoked paprika, cumin and salt. Towards the end of the cooking process, I added a little more water so they would absorb the liquid and lose their firmness. Once the lentils are mashed, I remove them from the heat and fold in a little bit of ghee to give them a buttery deliciousness. This step is optional of course, but I love the touch of butteriness. I then plate the lentils and top with labneh, which is a thick strained Greek yogurt creamy kefir cheese. This gives me the same vibes that I would get if I were putting sour cream in my mashed potatoes AKA absolute deliciousness tangy creaminess with comforting buttery potatoes. Top it with salt, pepper, paprika and chives or scallions and bam! We have a winner. 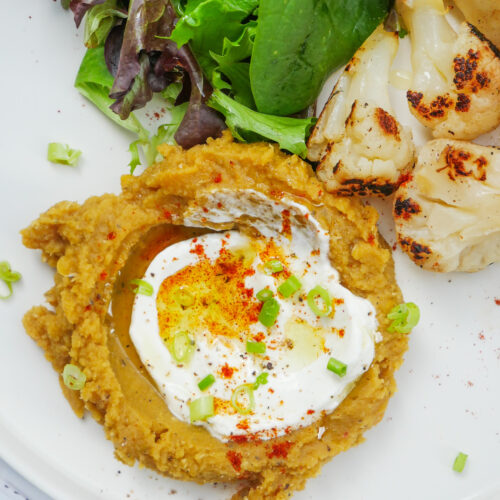 This comforting healthier alternative to mashed potatoes is such a hit! Boiled red lentils, mashed into creamy perfection, then folded with a little bit of ghee. Plate and top with labneh (a kefir cheese,) salt, pepper, paprika and chives. If you're vegan you can also use a vegan butter substitute and a vegan yogurt or sour cream on top!
Print Recipe Pin Recipe
Total Time 30 mins
Course Appetizer, Side Dish
Cuisine American, Middle Eastern
Servings 4 side portions