This is one of my favorite go-to dishes because it’s both delicious and easily made in thirty minutes! Yes… 30 minutes. For all this FLAVOR!! What I love about this coconut rice bowl with shrimp and scallion sauce is that it’s a bomb of complex and fun flavors and aromas. If you’re like me and enjoy different flavors coming together like sweet, salty and slightly acidic, you’ll definitely go crazy for this dish! It’s sweet, it’s salty, it’s bright. 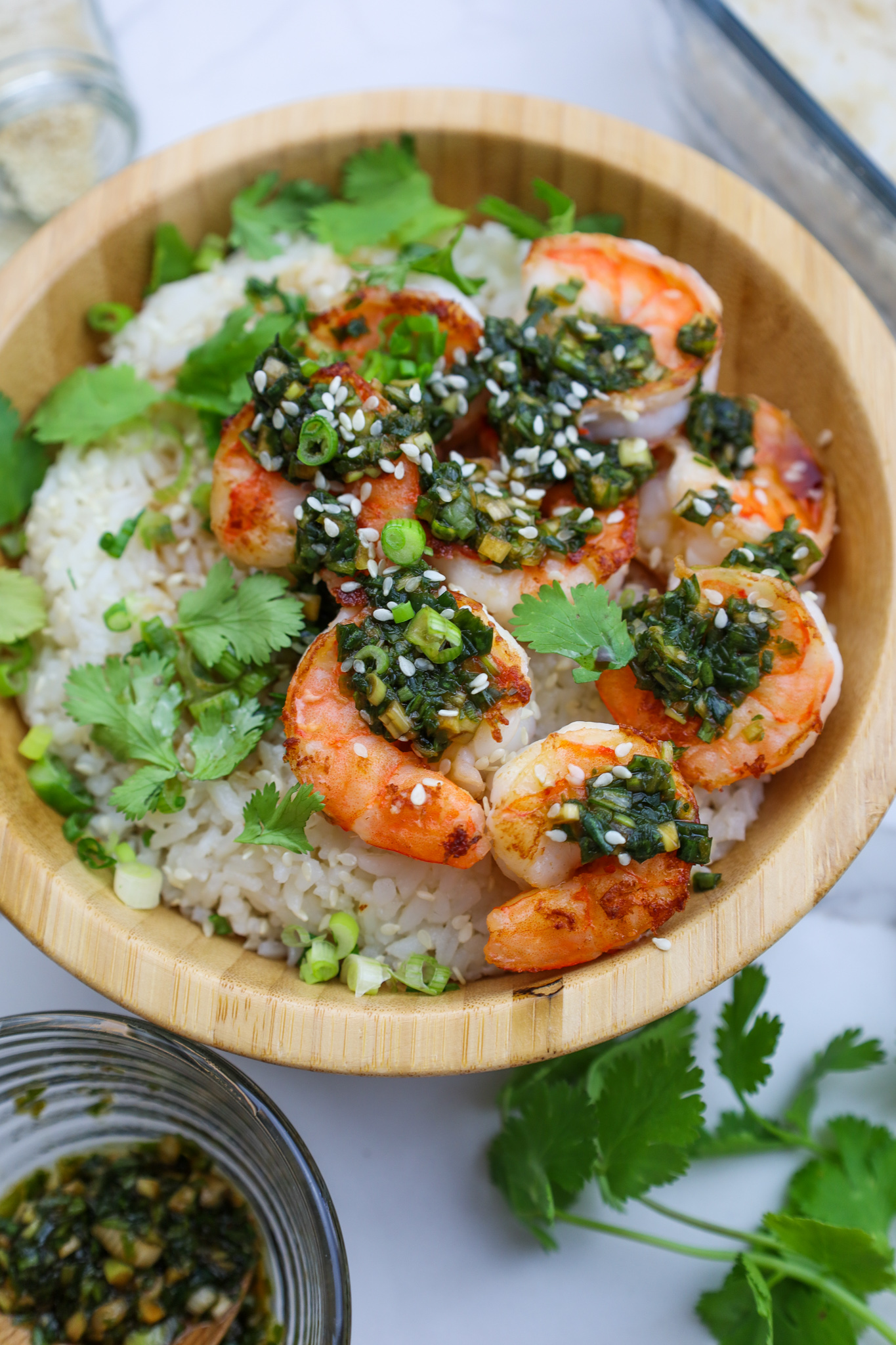 You can make the coconut rice on its own, or you can make this epic bowl with the seared shrimp and scallion sauce. Either way, you’ll see two separate recipes below.

Something I want to note before we get started is that this dish is inspired by Asian cuisine. I’ve ordered coconut rice at many different Asian establishments in New York City (and hopefully here in Philly soon!) and I can say without a doubt that coconut rice is always going to be in my top 3 favorite grain dishes. If you’re not familiar with this coconutty deliciousness, it’s found in cultures throughout the world, but mostly in the tropics around the equator. In Indonesia, you can find it prepared with coconut milk, ginger, and lemongrass. It’s also found in Central America in Honduras where they prepare it with coconut milk, garlic, onion, and beans. Yum. 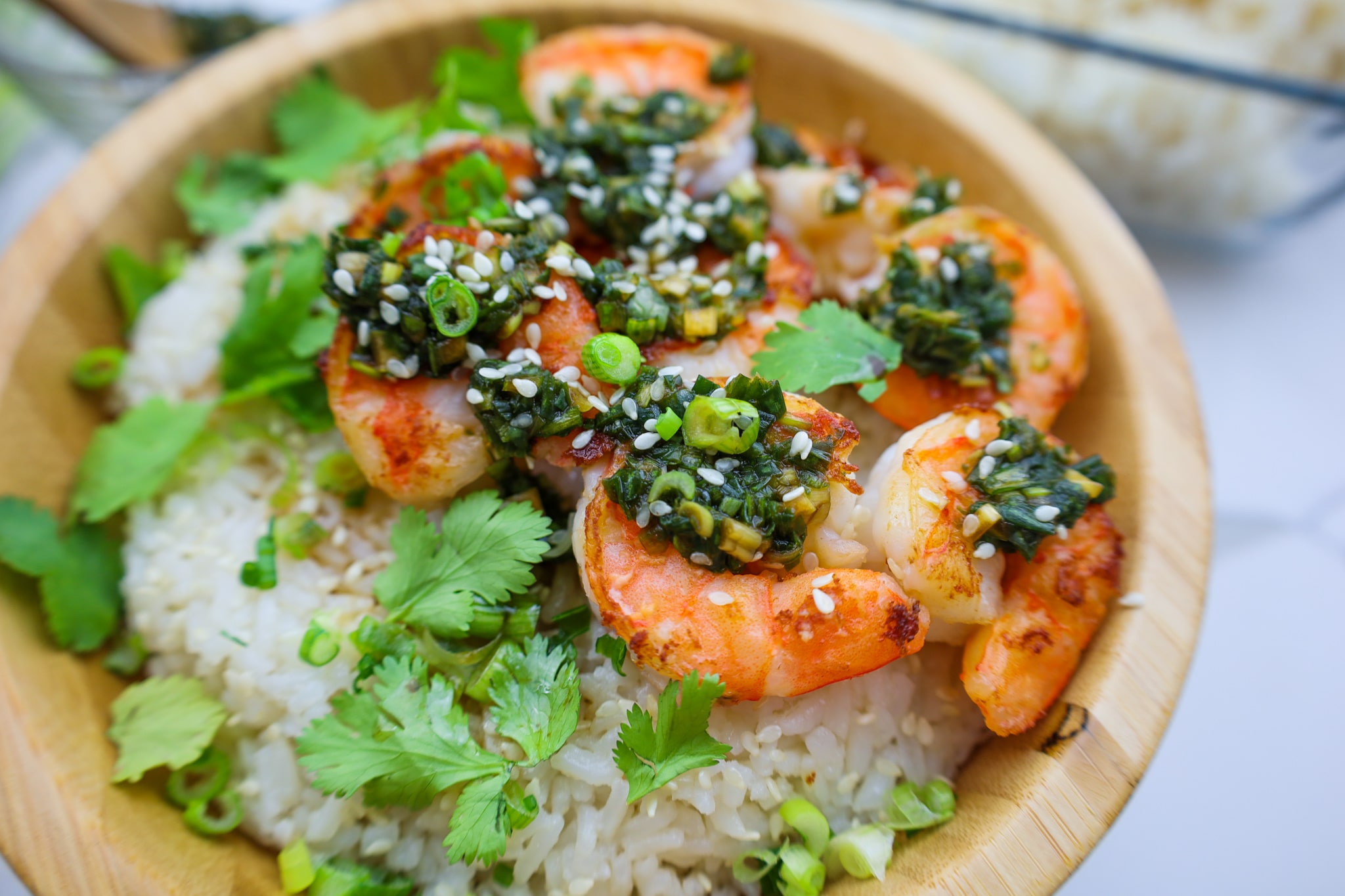 The scallion sauce I made here is inspired by Vietnamese scallion oil. The original sauce is called mỡ hành (pronounce muh hand), and it goes with practically anything. The Vietnamese use it to add flavor to steamed rice, noodles, soups, salads, and different types of meats. It’s really addictive, so you may want to make a double serving!

The magic about this coconut rice with shrimp and scallion sauce is that it works just as well for lunch in the office as it does for a candle-lit dinner. You can make the rice and sauce in advance, so it’s perfect for meal prep. The rice can be made up to four days before, as long as you cover it in a sealed container in the refrigerator. The scallion sauce can be made up to a week ahead, just make sure it’s covered and refrigerated as well. You should make the shrimp fresh though as it just tastes better straight out of the pan.

What if I don’t have a pressure cooker?

I don’t really like sweet and salty dishes, is there a work-around?

Are there other ways to prepare coconut rice?

Yes, there are plenty of ways to prepare coconut rice! Coconut rice is a really versatile dish. In Thailand, it is even eaten as a dessert with slices of ripe mango and coconut cream. It works well with ginger, turmeric, lemongrass, and other spices. It can also be made with garlic, onions, cilantro, raisins, and kumquats. 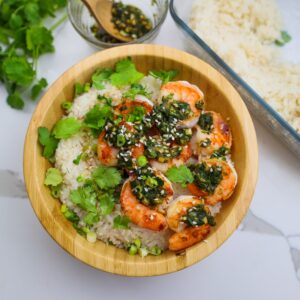 This dish is a complex mix of fun flavors and aromas and is easy to make. It's versatile enough to either bring to the office for lunch or serve during a candle-lit dinner. The sweetness of the coconut rice pairs excellently with the salty and slightly acidic flavors of the shrimp and scallion sauce. This dish is definitely a winner!
5 from 1 vote
Print Recipe Pin Recipe
Total Time 30 mins
Course Appetizer, Main Course, Side Dish
Cuisine Asian
Servings 4 people

If you don’t have a pressure cooker: you can make this coconut rice in a rice cooker or just on the stovetop. Follow the same instructions and let the rice simmer with the lid on until all the liquid is absorbed, instead of using a pressure cooker.
Keyword agave nectar, cilantro, coconut milk, coconut oil, rice, rice vinegar, scallions, sesame oil, sesame seeds, shrimp, soy sauce

2 thoughts on “Coconut Rice with Shrimp and Scallion Sauce”