Here’s my opinion on cucumbers. I don’t hate them, I just don’t love them. I never will eat a cucumber by itself. I don’t even like them in Greek salads ( sorry, please don’t @ me.) But, I do like them when they are accompanied by some kind of flavor encouragement. Whether that encouragement is a tangy yogurt (hello, celery tzatziki recipe that I absolutely love,) or completely demolished in a juicer and disguised by the flavors of ginger and lime, or a sesame soy dressing like we are making today….any kind of encouragement will do. I think cucumbers are actually very versatile ingredients because they are nutritious, they carry flavor well, and they also have a unique flavor of their own. What this means is we can shape shift cucumbers to become pickled, or for them to pick up the flavor of their marinade. OR, we can use the unique essence of a cucumber to completely flavor a dish, and give it a super refreshing vibe. It can go either way. However, if you’re seeing a cucumber recipe on my site, the chances are that the cucumber is the side piece and that there’s another flavor or combination of ingredients stealing the show.

That’s what’s happening in this cucumber salad. The cucumbers are a refreshing canvas for this salty, slightly briny and nutty dressing that I cannot get enough of. There’s something about rice vinegar that makes my mouth water uncontrollably, and combined with the nutty sesame oil and salty soy sauce, it’s truly a dream dressing.

Now before we get to the recipe, I want to make sure that you guys know I am not trying to take credit for this creation. Cucumber salads like this are extremely common and I’ve had them at numerous Asian restaurants, from Chinese to Japanese. So the idea of putting cucumbers in a sesame soy dressing is nothing new, but this recipe is my way of doing it. It’s extremely simple just like my cabbage salad recipe (also adapted from salads I’ve had at Asian restaurants,) and because it’s so simple and flavorful, it’s become a household staple for us.

You can top this salad with my honey miso chicken, or you can top it with any protein of your choice. We like to eat it as a starter, or pair it with some seafood. In this instance, I paired it with a soy salmon, which I marinated in soy sauce for 10 minutes, and then broiled until the top was crisp and the salmon was fully cooked. 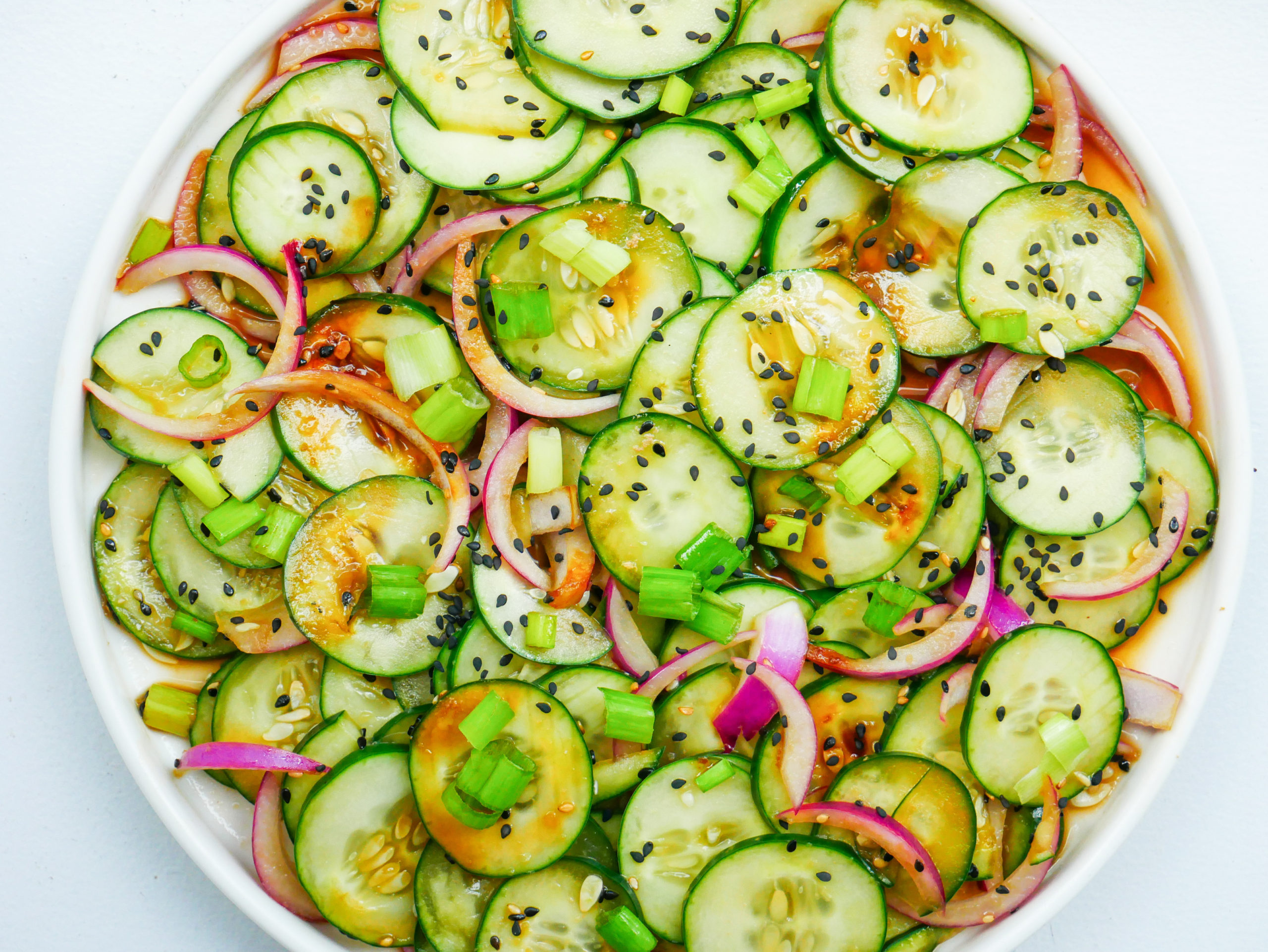 Refreshing sliced cucumbers tossed in sesame oil, soy sauce and rice vinegar. Add some fresh ginger and red onion for an extra pop of flavor and you have the most simple and delicious cucumber salad of all time! Top with a protein of your choice, whether its tofu, salmon, cod, shrimp, tempeh, meat, or even just a handful of peanuts.
5 from 2 votes
Print Recipe Pin Recipe
Prep Time 15 mins
Course Appetizer, Main Course, Salad
Cuisine Asian, Chinese, Japanese
Servings 2

11 thoughts on “Cucumber Salad with Sesame, Soy and Ginger Dressing”