I feel like I can finally breathe because it’s now October, which means it’s officially socially acceptable to cook with pumpkin all the time in my plaid flannel…with my pumpkin spice latte and apple pie candle burning. I also don’t have to turn on my AC all the time to pretend its cold out. I digress… let’s talk about this chicken.

It’s a spatchcock chicken (yes, spatch – cock – get the giggles out now!!!) which means we are flattening it out so its splooted on a sheet pan, which ultimately yields a faster cook time with the same juicy meaty results! Last year, I did a tutorial on how to roast a chicken the traditional way (linking here, pardon my horrifying instructional voiceover) but I’m gonna be honest with you: I love spatchcocking my chicken way more than I like the traditional preparation. I also think it looks so rustic and gorgeous splayed out with some root veggies. You *can* do this with a turkey, but I haven’t done that yet so I don’t want to advise you on that big Thanksgiving decision.

So our chicken is flattened out on a sheet pan — cool — but what about this pumpkin butter situation? Is this going to be pumpkin overload, because.. ew? I’m so glad you asked! When I typically roast a chicken, I love to put a mixture of herbs and butter underneath the skin to yield ultimate crispiness and flavor. With this special pumpkin chicken, I decided to make a pumpkin compound butter to put under the skin, which is essentially a mix of plain pumpkin puree, butter, rosemary, garlic and spices. It has a warm, nutty pumpkin essence to it, but the garlic and rosemary also mellow it out to give herbal, savory vibes so that it’s not too squash-y. If you served this to someone who doesn’t like pumpkin flavored foods, but they don’t mind eating squash, they would like this. If you served this to someone who hates pumpkin everything and hates squash (like my husband Sebastian,) they also still would probably like this. I’m only saying that because Sebastian liked it, so I’m not sure if that’s enough evidence to convince you and your pumpkin hating friend(s.) The pumpkin butter gives it an aromatic, spicy and nutty depth of flavor. That’s essentially all you have to know.

I obviously love the flavors of this dish, but one of my favorite things about it is how easy it is to make. I’ve made spatchcock chicken for our family a handful of times because it’s literally the easiest thing ever. It’s October — I’m already being basic, just let me say literally as many times as I literally want. Xx. Pumpkin spice.

Now that we know the flavors, let’s talk about preparing the chicken. I’m talking about before we even get to spatchcocking (which I show in photos below.) To brine or not to brine? That’s is the question. And the answer is really up to you. I’m lazy and brining is sometimes really a hassle. If you’re going to brine or if you want to brine, I would recommend trying out a dry brine. It’s a like halfway less annoying than a wet brine (who really owns a tub that would fit an entire chicken submerged in water!?), and essentially consists of rubbing the chicken in salt and letting it sit before cooking. Bon Appetit wrote a great article on how to dry brine, so check this out if you want to brine and do this 24 hours before. I will say, I’ve made this without brining the chicken and it was still great. Here’s my thought process: if you’re making this for everyday, you can totally skip the brine. If you’re making it for a special occasion, do the brine. 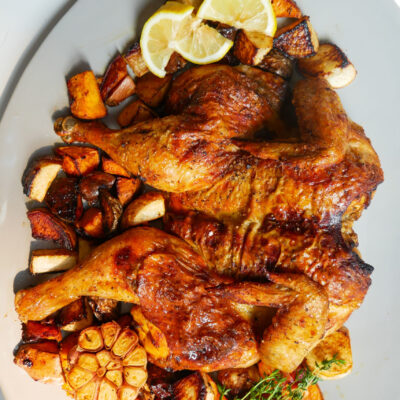 Spatchcock roasted chicken with a delicious pumpkin rosemary compound butter underneath the skin. This chicken is easy to prepare, baked to golden brown, crisp perfection, and juicy as can be! The recipe includes instructional photos for each step.
5 from 1 vote
Print Recipe Pin Recipe
Course Main Course
Cuisine American, Gluten-Free, Holiday
Servings 4 people