I’m usually the girl eating real pumpkin pie for breakfast, but this is much healthier and my first step towards breaking my pie-for-breakfast habits. Let me break it down for you: we’ve got pumpkin pie chia pudding as the “filling,”  maple brown sugar oatmeal as the “crust,”  and cinnamon Greek yogurt as the “whipped cream.” Top with some pecans or walnuts, close your eyes and use your imagination. You won’t be able to tell the difference.

For the Pumpkin Pie Chia Pudding (prepared the night before)

For the jar layers (prepared the day of):

1. In a large bowl, combine all of the ingredients for the chia pudding and mix. Pour into a jar and let sit for at least 3 hours or overnight.

3. In a bowl, mix cinnamon into the Greek yogurt until thoroughly blended.

4. Starting with the oatmeal, layer each ingredient in a jar. I layered the oatmeal, pumpkin pie chia pudding, then Greek yogurt and repeated until the jar was full. Top with chopped pecans or walnuts and an extra hint of cinnamon. 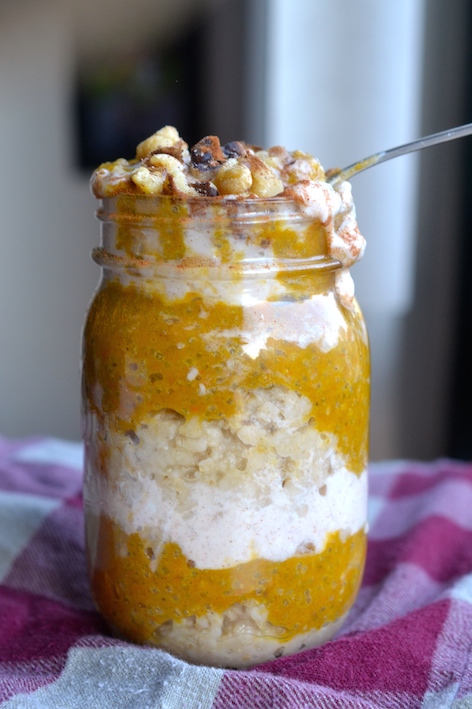